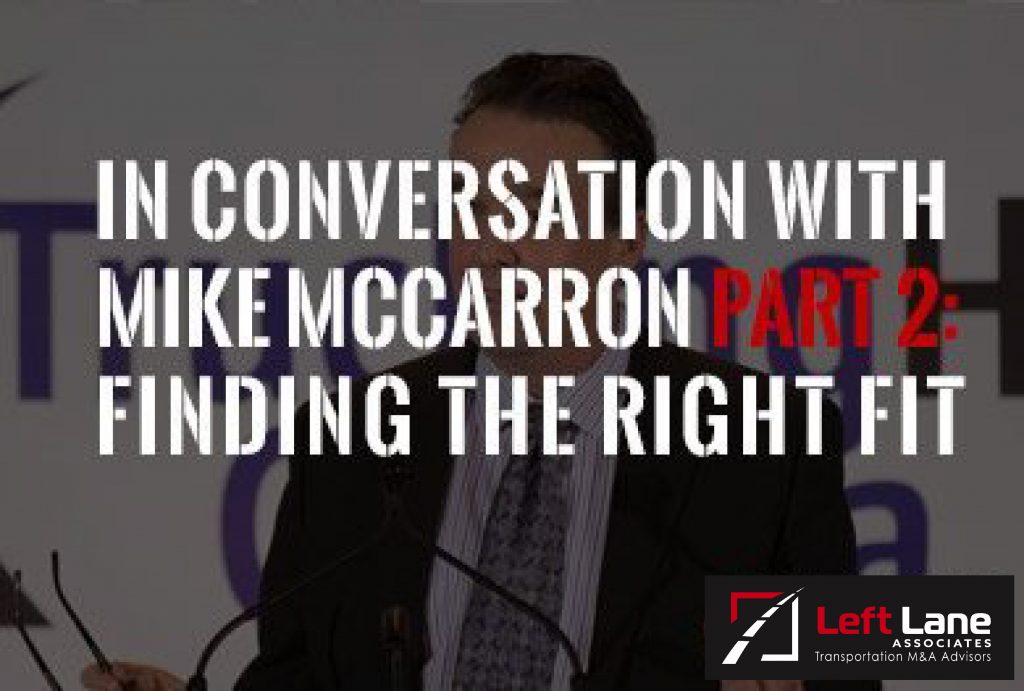 Looking to grow by acquisition?

Or perhaps after many years in the industry you are ready to sell. Either way, finding the right fit in the seller/purchaser dynamic is critical.

Looking to grow by acquisition? Or perhaps after many years in the industry you are ready to sell. Either way, finding the right fit in the seller-purchaser dynamic is critical. On October 16th, Mike McCarron, the well-known former owner of MSM Transportation, will team up with M&A guru Doug Nix for the much anticipated session “Mergers & Acquisitions in Transportation: How big are the opportunities?” at our Surface Transportation Summit. Finding the right fit will be one of main areas of discussion.

Enjoy Part 2 of our wide-ranging discussion with McCarron: Finding the right fit

TN: How did you identify Wheels Group as a good fit?

McCarron: Wheels and MSM have a long history together. We were two of the first transportation companies to become one of the 50 Best Managed Companies about 17 years ago. We were both major customers of the same software company, so we worked a lot with them developing programs over the years.
We’ve done a lot of business over the years. And chairman and CEO Doug Tozer is not only a neighbor of mine, but we grew up in the same neighborhood, so he’s been a good community friend for over 30 years.

TN: Did having that pre-existing relationship make the process any easier, or perhaps even more difficult?

McCarron: How this all started was, I was having coffee – something I almost never do – with a friend at the local coffee shop and Doug happened to walk by at 10 on a Saturday morning. He said ‘Mike, can you give me a call after your coffee?’ I gave him a call as soon as I got in the car and spent the next two hours driving around, talking to him on the phone.

Because of my relationship with Doug, I didn’t get actively involved in the negotiations until near the end, because I really felt it was best to stay out of it. It became evident pretty early on that there were a lot of cultural similarities, a lot of synergies from the standpoint of, we had skills and expertise they didn’t have and conversely, they had some we didn’t have. They had just turned public in what was a third-party consolidation platform and it was just a really good fit.

It was almost like buying a house. Once you find an area you like, when you’re looking at houses and the right one is there, you know it’s the right one and you buy it. I knew early in the process that Wheels was a good fit and the challenge was to work out a deal that would work for Doug and the shareholders of the company and satisfy some of the requirements Bob and myself had. It was still a very long process. It took almost nine months.

TN: Does having a partner in the business complicate the sales process, or were your objectives always aligned?

McCarron: My partner and myself, about three years ago, had some disagreements on the way the business direction should go at MSM. But, it was a respectful disagreement.

When business went bad, it needed the type of leadership Bob could bring. He ran the ship on a daily basis. We didn’t necessarily agree on the long-term direction of the company, but we were not foolish enough to do it in public or allow it to affect our ability to run the business. I was proud of the way we handled things. I think with a lot of partnerships, egos would’ve gotten involved.

James, we met each other 22 years ago and didn’t know each other well at all, and due to circumstances we ended up becoming partners. A 22-year run was a good run. The fact we disagreed on a few things didn’t make it a failure; it was a success.

When it came time to sell the business, Bob was in charge of that process. I had a lot of say, because we were both majority shareholders. We were both in tune with where we wanted to take this thing, we worked hard to get the business ready to sell and we both agreed a strategic partner was going to bring us the best return.

– In Part 3 of this interview, Mike takes us inside the boardroom for a peek at how the deal was constructed