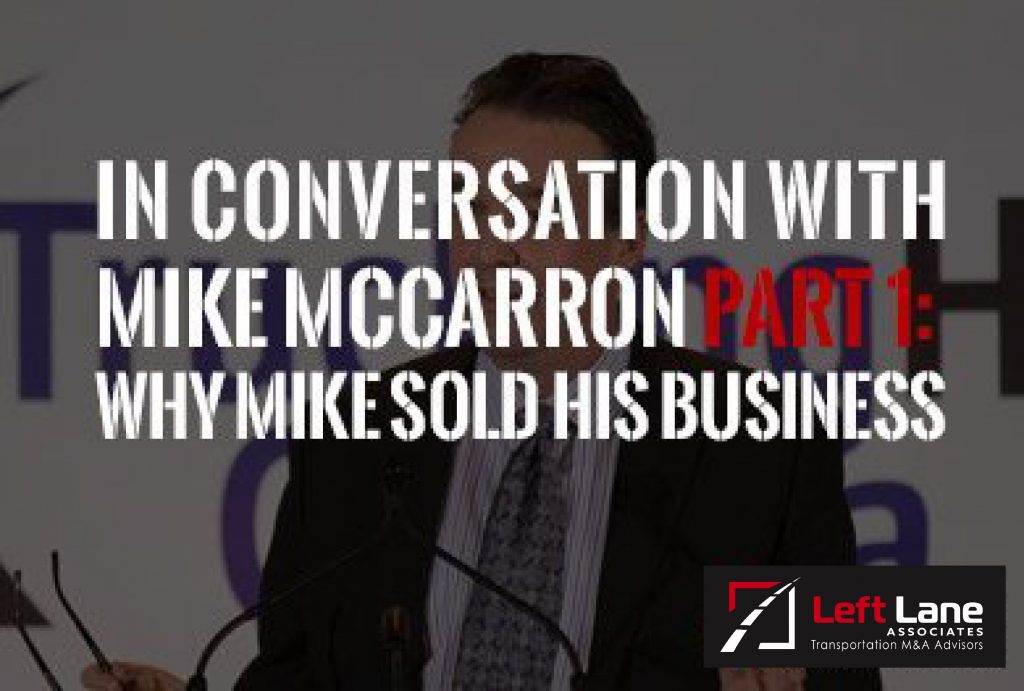 Wheels Group announced it had acquired MSM Transportation in a blockbuster deal worth $18.6 million.

The announcement came as a surprise, in part because Mike McCarron, managing partner and the public face of MSM Transportation was just 52 years of age – seemingly too young to be considering retirement.

What was the reason for the sale? Why was the timing significant? And what was learned along the way about the arduous process of selling an established business? For the answers to these questions and more, we caught up with McCarron for an exclusive interview.

When we spoke to McCarron, he had just assumed a new position working in mergers and acquisitions with Wheels Group (a role he was mindful not to discuss with Wheels until after the sale of MSM had been finalized).

Over the course of the next week, Trucknews.com will be running the seven-part interview. The interview will also appear in the January issues of Truck News and Truck West magazines. You can also check out the November-December issue of Motortruck Fleet Executive to catch McCarron’s regular column, in which he writes about his reasons for selling the business.

In conversation with Mike McCarron Part 1 of 7:

Why he sold his business

TN: Mike, at 52 years of age, you’re a pretty young guy to be selling your business. You’ve still got some years ahead of you. Why’d you decide to sell this year? Should we be reading into the timing in any way? Are you down on the industry and where it’s headed?

McCarron: There were a bunch of factors. With MSM, we got to the point where we realized we were too big to be small, but too small to be big, which is a very difficult position to be in. We felt that in order to get the business to the level where you get true economies of scale, we were going to have to invest a lot of money into the business; a lot of money that my partner (Bob Murray) and myself didn’t feel like risking, frankly. We decided a couple years ago to start getting ready to sell and if the right opportunity came along, we’d take it.

We decided, let’s learn the process, let’s get our house ready to sell, let’s get the corporate clean-up done and let’s see what happens, because neither one of us were prepared to take the risk required to take the business to the next level. We thought maybe it was better to take our chips off the table and secure our families.

Then, as we started looking at things, we started recognizing the dynamics of the marketplace. We recognized that as much as we positioned ourselves as a hybrid transportation/third-party company, we really started positioning ourselves more as a broker, because we realized the multiplier would be higher.

Freight brokering was really a phenomenon that started when trucking deregulated. It was a bit of a gold rush in the late 70s and early 80s. They were started largely by sales guys who saw an opportunity to become self-employed in a business where normally they wouldn’t have had that opportunity before. Third-party brokering became very mainstream and it spurred a whole new network of smaller trucking companies.

But if you look at who historically started these businesses, if they were 30 years old in 1980, they’re 62 years old now. We were really concerned about what would happen 10 years down the road when all the other baby-boomers were trying to sell their businesses. We were concerned about the glut in the market and what that would do to our EBITDA and to our earnings and what the multipliers would be and who would buy all these third parties?

I know personally, I was extremely bored. And business was not as much fun as it used to be. It seems that in the trucking industry, when the bottom fell out, a lot of the fun went out, too. Everything was a day-to-day battle. Every time you turned your head there was some other factor that was out of your control that would affect your bottom line.

We also had a situation whereby it appeared the M&A market was pretty strong. We started to get some more calls. Certainly, I know the investment people we talked to were sitting on a lot of money. And say what you want about this industry, prospects for transportation and logistics over the next 15-20 years are actually very good.

If you put all those factors together, we felt it was the right time.

This time last year, we started trying to find out what would be the right fit. We wanted to really find a company that would be a fit, that would allow us to get our money off the table, that would take care of the people that worked for us – that was very important, that people would get taken care of – and that would allow both Bob and myself to leave, maybe not the industry, but leave MSM.

TN: So, you were quietly preparing the business for a sale and at the same time, you’re getting more calls from interested parties. Are these cold calls from potential suitors?

McCarron: We always got calls, but when you talk about suitors, there are the investment suitors and the strategic suitors. We felt the problem with the pure investment suitors, the institutional investors, is that their game is very simple. The people with the money want to come in, rape and pillage your business, cut costs and get in and out within five years.

Take the situation MSM had; we had a lot of long-term employees. We had a very stable culture. Sometimes when you have long-term employees, you look at the balance sheet and the secretary who started making $20,000 25 years ago and got a 3% raise every year, they’re making money that looks on paper like you could get someone else to do their job for a lot cheaper.

We were really concerned, not only with the type of dollar we were going to get from just a money buyer, but concerned with what they were going to do with our people. So, we were looking for some strategic opportunities. I can’t protect the staff forever, but we were looking for a situation that at least would give them a fighting chance to prove their worth and show that they can add value to the bottom line.

– In Part 2 of this interview, we’ll discuss finding a buyer that ‘fits’